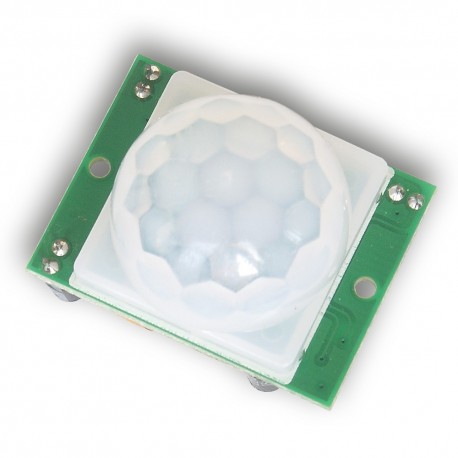 PIR sensor type HC-SR501 allows for motion detection based on the analysis of infrared radiation.

This product is no longer in stock

PIR sensor type HC-SR501 allows for motion detection on the basis of infrared radiation. The detector detects the change of 2 separated IR windows and the amplifier converts the signal pulse with a high logic level. Such a signal can easily be used to drive a transistor or logic input processor.

In the case of the use of Lan Controller detector output must be connected to a logic input INP1-4D. Note, however, that forced the detector Low Low condition is a state of rest, and the high high points to the liberation PIR-a.

On the board there are 2 potentiometers described as Sx and Tx.

Tx sets the high state after operation of the detector - for several time s potentiometer should be a paragraph. roughly 9 per hour.

The sensor operates in retriggerin, i.e. in the case of motion detection at the output is maintained at all times high.

16 other products in the same category: