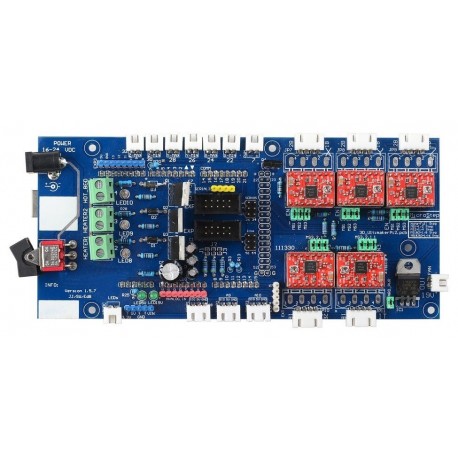 ONLY PCB without StepStick Driver

This is a board that's very similar to other Pololu-based electronics implementations, including RAMPS, but it can support up to 5 steppers (three for X, Y, Z, one for an extruder and one for any other function). You can add as many stepper driver carriers as you need. It is designed to run at higher voltages than 12 Volts, This allows you to put 90 Watts out of one MOSFET and run your stepper motors with more torque and higher maximum speeds. This board is also used on the Mantis-30 milling machine from Protospace and on various Mendel's that people have built.

- The Arduino Mega 2560 can be self-powered from the DC-jack. - Jumper added for controlling autonomous power setting - 100 uF connection to Vcc2 - High-current track from DC jack and ON/OFF switch moved slightly - Better suiting the footprint of the rocker switch

Marlin firmware compatibility is unaffected by this updated PCB.

Arduino pins as seen from above, the gray box with the text is also the orientation part of the connector

The tools you need

11 other products in the same category: